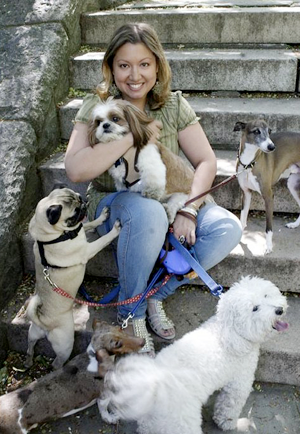 A small business that gives back.

Founded in 2008, incorporated, bonded and insured through Insurers of the Carolinas, members of the National Association of Professional Pet Sitters, Pet Sitters International and Association of Pet Sitting Excellence. Our Pet Caregivers are Pet CPR certified and thoroughly screened with criminal background checks.

For Jacqueline Rivera, you can say it all started with a chicken.

A trip to the corner grocery store in Washington Heights led to an encounter with a dirty one. It was dark and rainy and there he was, wandering. Skipping the store, she bathed and fed it at home. On what was supposed to be a college shopping trip downtown, she brought home a baby husky. During an apartment hunt, she ran into an abandoned apartment with 3 kittens and 1 guinea pig. They were all rescued. A street cat followed her home. She named him Lucky.

Jacqueline holds a Bachelor of the Arts from University at Buffalo and a certification in Marketing from Millard Fillmore. She studied abroad at the University of Cuba in 2001.

She was born and raised in New York City to a Peruvian-Chinese mother, Puerto-Rican father and is bilingual. Her diverse background exposed her to the arts at an early age. She studied Music at the Professional Performing Arts High School, where she also kept herself busy taking extracurricular courses during the weekend and summer at Columbia University, Cooper Union and BMCC. Additionally, she interned as an Assistant Manager at Bloomingdales during her senior year in high school.

Eddie was rescued from a kill shelter in South Carolina. Little Edgar was a charmer from day one to everyone! I saw him online with GROWL Rescue (501non-profit organization) and volunteered to foster to adopt him, it was only a couple of days until he had charmed me and indeed found his forever home! Little Eddie now struts his stuff everywhere and he rules the streets in Manhattan. He now holds pet food drives during the holidays, walks at Bark for Life (a cancer walk), has appeared on the Working Woman Report on WPIX and is strutting down the Catwalk for Paws in the City (an event towards helping other rescues like himself)!

In order to remain transparent, please review our policies and more