My mom never let me have a dog. Maybe that’s why I’ve always longed to fill my home with a fuzzy wet nose and the tapping of happy paws.

In 2006, my sister and I visited a friend and saw a puppy slumped over her chest. He was so calm, I had to check if he was still breathing. Instinctively, I ran over to pet and hold him. He nuzzled under my neck and fell asleep. The cat and dog with whom he shared a home had not welcomed him into their circle. He enthusiastically tried to fit in, but the cat scratched his eye in disapproval. They had to rehome him. I jumped at the opportunity and finally had a canine companion. 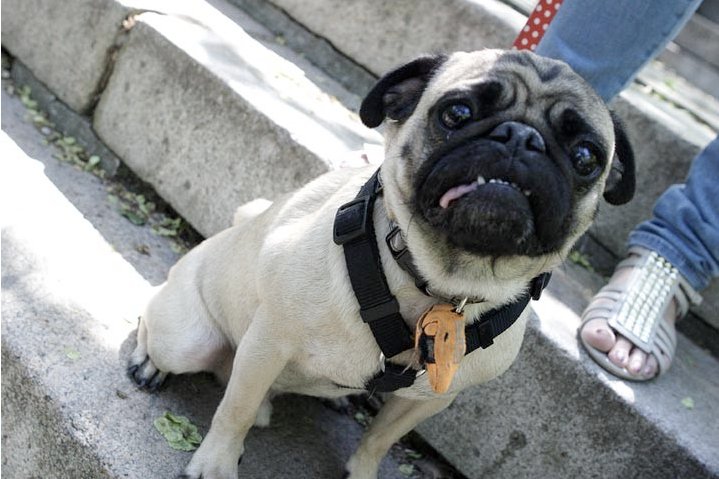 He grew up to be a wild child, chasing his tail in circles and making everyone laugh; a natural clown. Winning the majority of contests he entered, he became a hit! Gracing the Riverdale Press was only the beginning. He had a string of charity events lined up, but his stardom was cut short in 2010, at the tender age of four.

We were running around playing chase one afternoon. He loved that game. I still remember him pouncing back and forth, sliding around with his tongue hanging over the side of his mouth. He never could get a grip on those hard wooden floors. Suddenly he froze with a blank stare in mid-play and tipped over. Startled, he got up and hid under the bed.

Deep down, I knew something was wrong, but convinced myself it was the surface. After all, Odie had always a clean bill of health. A few days later, he fell again — this time seizuring and foaming at the mouth. My friend immediately drove us to the emergency room. This commenced the longest week of my life. The good doctors at the AMC ran a series of blood tests. They all came back negative. A positive test would’ve been welcome. He was transferred to the Neurological department. All tests were negative again. Our worst fears actualized; it was Pug Dog Encephalitis (PDE). A team of doctors met with me and explained that it was a swelling of the brain. I asked, how soon can it be fixed. With a long pause, the doctor said, “There is no cure, I’m sorry.”

Other breeds have been known to survive, but no pug ever has. Part of a pug’s endearing look is in part, due to their cute, compact heads. The size of their head is also why they don’t survive. Edie’s head was extra adorable. A few days ago, we were just playing, and he was happy. I stared at his sedated body with phenobarbitals in his system and his questioning button eyes staring back at me.

He continued to have breakthrough seizures, barely awake. One night, he sat up gasping for air. X-rays showed one of his lungs collapsing. With a tube assisting him, he stared at me in a panic. Doctors now surrounded me asking me to make a decision. Sleep deprived, I begged them to give me time to process everything. Just a week ago, he was sprinting down the hall. We had so much to do, he couldn’t slip away yet!

I took him home and held him against me. His soft warm body curled up next to mine. I called another doctor for a 3rd opinion. She made a home visit and concluded what the other two had. I had to do what was right for him. I called my friends and family.

We opened a tub of liver treats and for a moment he lit up and seemed like the old Odie I knew: a care-free spirit who thought everyone wanted to play with him. He stumbled toward the tub, diving head-first into the treats. He ate as much as his tummy could handle while walking in circles and bumping into things.

Momentarily, all was good again. We played with him for the last time when reality settled back in. The doctor placed the injection. I held him in my arms, told him how much a loved him and watched him close his eyes, his breaths farther apart until the curve of his back no longer rose, his tongue hanging. I continued petting him until he was wrapped up gently and taken away. He would no longer suffer again.

I had just separated from my fiancé and now I had lost my loyal companion. I would come home expecting Odie to greet me at the door with a toy. I would hear a quick scurry in my sleep and wake up to the cold emptiness. His toys laying around served as a constant reminder of his absence. His paw print brought comfort every so often, following each indentation of his pad. A year and a half later, I let go of the guilt and donated most of his belongings. It was time to let another dog into my heart. Somewhere in between, I fell in love, too.

Months of rummaging through petfinder.com led me to Edgar (now Eddie). Eddie was found on the streets and I became a foster failure within a few days. Eddie is the opposite of Odie, a Brussels Griffon mix from a kill shelter in South Carolina. He’s a laid back Southern gentleman who thrives on naps and petting. He continues Odie’s legacy by advocating for homeless animals in pet shows and walks for cancer.

The hardest part of sharing my life with Odie was saying goodbye. Somehow through this pain, I was able to find hope. Eddie taught me to love again, and I cherish every day with him and my now husband.

Notes: There are several ways to express grief. It can be therapeutic. Some people paint, others write. I wrote this bit about my loss and submitted it to Clarice and Friends. They are dedicating their book to pets who were suddenly lost at a young age. Click here to submit your story. For a pet portrait, contact Andrew David Barron.

Next post: How to Prepare for a Meet and Greet

Previous post: Spring is here and that means SHEDDING SEASON!!